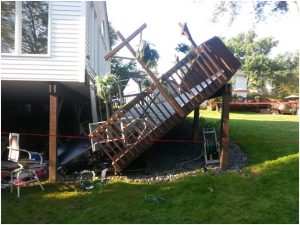 According to statistics compiled by the North American Deck and Railing Association, the number of deck failures and resulting injuries has been increasing at an ever greater rate over the last 10 years. Between 2000 and 2008, there were at least 30 deaths reported as a direct result of deck collapses, and more than 75 percent of the people on a deck were injured or killed when it collapsed.

With 40 million decks in the United States that are more than 20 years old, it’s important for homeowners to check their deck, preferably with the assistance of a qualified engineer, builder, or home inspector. Like all structures, decks need to be maintained and should be inspected on a regular basis, and after a heavy snow load and before an event that will result in a large number of occupants. Many older decks were built before code requirements were in place to protect consumers.

Last year alone I investigated 2 deck collapses and 2 railing failures. These collapsed decks had deck-to-house attachments using one row of 10d common nails in one case, and two rows of 2½ inch long deck screws, spaced at 18 inches, in the other case. Both had also incorrect or missing flashing at the deck-to-house connection, which allowed long term moisture penetration and associated deterioration of the wooden structural members. Since these defects are concealed from view, the owners don’t realize how close to a collapse they may be.

In a 2011 investigation, I found that a 2 story deck collapsed when it was exposed to dynamic loads. At a 4th of July party, about 30 people were dancing on the deck, which gave way because it lacked adequate sway bracing. Another failure contributing factor was that the deck ledger was fastened to the framing of a cantilevered wall portion. A deck must also be able to resist lateral and uplift loads that can act on the deck as a result of seismic activity or wind.

Inadequately fastened railings are another common source of accidents, giving way when a person leans on them or stumbles against them. If the height of the railing is below a person’s center of gravity, typically at 55% of their height, a stumble against the railing may result in this person’s fall over the railing. While building codes require guards against open sided elevation drops to be at least 42 inches high, a 36 inch height is allowed for single family residences. This reduced railing height increases the probability of a person taller than 5.5 feet and stumbling against the railing, to actually fall over it.

Since 1932, building codes have required handrails to be designed and constructed for a concentrated load of 200 pounds applied at any point and in any direction. The 200 pound concentrated load code requirement has not changed since its inception in 1932. The center of disease control publishes statistics on obesity and obesity increases yearly at a rate of approximately 7%; it is estimated that currently over one million people in the US weigh over 500 pounds.

Also, wood is obtained from many trees that are randomly sawed along particular grain patterns, and strength can vary considerably within a sawn board, especially in connection with moisture penetration and saturation. The small rail wood end section engaged in the connection to the column or post is exposed to prolonged moisture penetration; this contributes to weakening of the wood strength and corrosion of any metal components, even if they were originally coated, a circumstance further aggravated by some wood preserving chemicals.

Because of the inherent uncertainties of live loads and wood strength, engineering design requires application of safety factors. This has been finally recognized by the International Code Council and a 2.5 safety factor is required by the International Building Code, which requires that railings resist a 500 pound load in any direction. Additionally, all rails must be constructed to prevent small children from falling through openings by having proper infill spacing. Stair configuration and step dimensions must also follow building code requirements and handrails must be graspable.

By now the number deck failures and resulting injuries and associated claims costs should have created a heightened awareness of required maintenance and inspection of decks, by consumers, the industry and code enforcement community alike. To save lives and prevent accidents, property maintenance codes need to be up-dated and incorporate specific inspection and maintenance requirements for decks. Deck builders and building supply dealers should encourage consumers to refurbish old and unsafe decks by offering sale incentives, and deck owners need to be proactive by doing preventative maintenance and repairs on an ongoing basis.

Mr. Szautner, P.E., P.L.S, D.I., is a Professional Engineering Consultant, specializing in Forensic Engineering. He can be contacted at forensicengineerszautner@verizon.net.